A good tomato in January?!?

Taking a cue from a fellow colleague, today I decided to eat at a Canton, OH institution, Bender’s. Bender’s has been open more than 100 years and bills itself as a place for fresh seafood, steaks, and chops. I looked at their menu on-line and saw that the lunch menu was much more affordable than the dinner menu.

What I didn’t realize when looking at the lunch menu on-line was that there were also daily specials. It was here I discovered what would eventually be my lunch: an oyster po’ boy sandwich. Now, I’ve had my share of “Po’ boys” here in Ohio, and quite frankly, whomever made those versions need to visit New Orleans and learn how to make a proper one.

But, I just couldn’t shake the notion, so I ordered one. It turns out that they have fresh fish and seafood flown in each day from Foley Fish in Boston, MA. No I normally wouldn’t order a fish dish on a Monday (see Anthony Bourdain’s comments to figure out why), but hearing that the fish was flown in daily eased my mind a bit. As luck would have it, the sandwich came with a cup of soup as well. I choose the roasted chicken, mushroom, and wild rice soup.

The meal started with a warmed dinner roll and my soup. 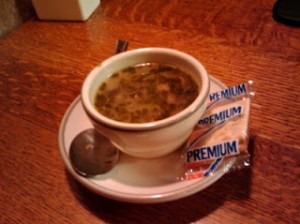 While the roll was warm, I tore off a piece and discovered that it had been microwaved. It had that chewy texture that bread gets after being reheated in the microwave. The butter pats were nice and soft though. The flavor of the roll was so-so and nothing special.

The soup was quite good and had a nice mouth feel to it. It was seasoned perfectly. The only downside was that there was far more broth than chicken, mushrooms, or wild rice. I don’t know that the “roasted chicken” part of the name really translated into any additional flavor boost. I suspect that perhaps in making the chicken stock, they roasted the bones first.

Finally, my server brought out my sandwich.

This was an amazing sandwich. Every single component was spot on. The roll was buttered and chewy and soft (in the good way), the oysters were fried perfectly and had just the right seasoning on them. The tomato, that single slice of tomato, was bright red, not mealy at all, and was actually sweet. In the middle of January! The only kind of fresh tomatoes available right now are simply terrible.

I asked my server about the tomato slice and she told me that the chef has several sources to get this kind of quality all year long. Nobody but the chef knows where these originate from (although they are all apparently Ohio tomatoes). They have a tomato salad listed on their regular menu that I will have to have the next time I go back.

The chips and pickle spear that was served with my sandwich were just run of the mill sides. But that sandwich … oh my, that was tasty!! And very reasonable considering: $7.99 for soup, sandwich, chips, and a pickle.